There are all kinds of “Sea Dogs.” This term is often used to describe mariners who have spent much of their lives on the ocean, and they are often referred to as; “Old Salts” and “Sea Dogs.” These are terms that are used out of respect for those who have weathered the many moods of the sea. Then there is another type of “Sea Dog,” and this refers to actual real dogs who have gone to sea on various types of vessels, sometimes recreational craft, but also those canines who have gone to sea on commercial working ships of all kinds. These working sea dogs go to sea to provide companionship to the mariners that they sail with, but they often have a job to do aboard the boat as well. I wrote about this in my book Neptune’s Nor’easter concerning the role that dogs played on commercial fishing vessels before the invention of radar.

The following is an excerpt from the book;

“I thought about how in my grandfather’s day, there were no weather forecasts. He had a compass and charts to navigate by, he had a lead line to determine the depth of the water under the boat and to view the composition of the sea bottom. He had a barometer to assess changes in atmospheric pressure, and he had his instincts and visual interpretation of the sky and the sea. He also had a secret weapon. He had a collision avoidance system that was foolproof and essential when anchoring up for the night in thick fog, when dory fishing, or swordfishing. He had a dog! My grandfather loved dogs, and he considered them an essential piece of safety equipment and companionship aboard the boat.”

My father and my brother told me that my grandfather often had a dog that went fishing with them aboard the boat, and the most famous of his dogs was Daisy, a black coated Water Spaniel. For most of my life I just always thought that my grandfather liked dogs and that was why he had a dog around. It wasn’t until recently that I understood that his dog was an essential piece of safety equipment on the boat. The dog was very much a member of the crew. Yes, the dog did what all good dogs do, he provided companionship to the crew. But, for a large portion of my grandfather’s career, he was dory fishing from a schooner for cod, haddock, halibut and other ground species of fish. Dory fishing was only done during the daylight hours because in the dark of night the men in the dories would not be able to find their way back to the schooner. So fishing stopped for the day when the sun went down.

On the next dawning of the sun, the whole process would start again. They also went harpooning for swordfish, and this could only be accomplished during the daylight hours so the schooner would anchor for the night in this fishery as well.

While the schooner was anchored up for the night on the fishing grounds, this is where the dog became a trusted and critical member of the crew. Most of the crew would be below decks sleeping, but one member of the crew would be awake and on watch and even more reassuring for the men sleeping was that they knew and trusted that their dog was always awake and watching over them. Due to the incredible hearing of dogs, they could hear trouble coming from miles away.

During the days of the fishing schooners, many vessels and men were lost at sea when a breeze would come up during the night and another schooner would drag her anchor and come crashing into their vessel and everyone involved would perish. A good sea dog would hear another vessel bearing down on their boat and sound the alarm to the crew that trouble was coming their way. These fishing sea dogs were also valuable when the vessel was underway in dense fog, as they would alert the crew of another vessel in their vicinity. Often the other boat would have their own dog, and these dogs would begin barking back and forth, and this would alert the fishermen on both vessels and hopefully allow the boats to avoid a collision.

These fishing sea dogs were valued members of the crew in the days of the great fishing schooners. The fishermen came to love and respect these dogs that helped to protect them while at sea. No one loved his sea dog more than my grandfather, Captain Louis Doucette Sr., and his favorite sea dog was Daisy, and the captain would prove his love for that dog beyond a shadow of a doubt on the evening of September 25th, 1932. To explain how my grandfather would demonstrate his loyalty to Daisy and how she would prove her loyalty back to her master, we need to understand the time and circumstances of this time in history.

The Great Depression began with the Stock Market Crash on October 29th, 1929 and it continued for a full decade in the United States and finally ended in 1939. Prohibition banning the sale of alcohol was enacted in 1920, and it was repealed in 1933. It was a tough and desperate time for everyone who was alive, bread lines and soup kitchens were everywhere, and people were going hungry. The market was so depressed that the fishermen were receiving one to two cents per pound for their catch. They required three to five cents per pound to breakeven. My father told me that when they would return to the dock in New Bedford from a fishing trip people would be standing on the dock begging for fish from the fishermen. My grandfather would always send a barrel or two of fish to the nuns that ran St. Mary’s Home for Children in New Bedford. It was his way to help feed the children that due to various circumstances were being cared for by the nuns. My grandfather also entered into bartering agreements with some local farmers. Farmers and fishermen have a bond that is forged by the life that they pursue. They must catch fish or grow successful crops, or they will fail. My grandfather would provide his farming friends with fresh fish, and they would provide him with meat, vegetables, and firewood, and this would help all of them survive these perilous times. These survival lessons and habits were stamped into the brains of these fishermen and farmers who grew up during the Great Depression. Even in the early 1960s, my father would send me across the street to see my friend Tom Alferes and deliver some fresh fish to his family who maintained a farm, and they also always sent me home with fresh vegetables. Old school manners and respect for hard-working neighbors that were forged in the depression.

This backdrop leads us back to the night of September 25th, 1932 and our story of “Daisy the Sea Dog” and the bond between man and his best friend. My grandfather and grandmother had eight children and an orphan that they had taken into the home, and Pa found himself in financial difficulty. He made a decision that he did not want to make, but it seemed to be the only way out, so he agreed to take his schooner and her crew and go “rum-running.” They picked up the liquor outside of the international territorial limits of the United States from a “mother -ship” and were in the process of bringing the contraband ashore on Cape Cod when they were caught by the Revenue Agents. The value of the liquor was estimated at $48,000 which in today’s money would be about $700,000. The crew was arrested and the schooner Addie Mae was confiscated by the feds. They were all taken to the jail in New Bedford to be held to await a hearing in Federal Court in Boston. Here is where the fun begins.

Grandpa and his dog pose for the newspaper reporter.

The newspaper article calls the dog Davie, but she was no he and her name was most definitely Daisy, and she was a bonafide fisherdog. Daisy was 4-years old at the time of this adventure and her unfortunate jailing in New Bedford.

Here is Daisy in 1937, five years after her rum running arrest. She is hard to see in this old photo because of her black coat and the darkness of her surroundings. She is posing on the fish hold hatch cover with “Slim” a member of the crew. Still aboard the boat and going fishing at the age of nine. She is now both an “Old Salt” and a “Sea Dog” who was respected by all who went to sea with her! 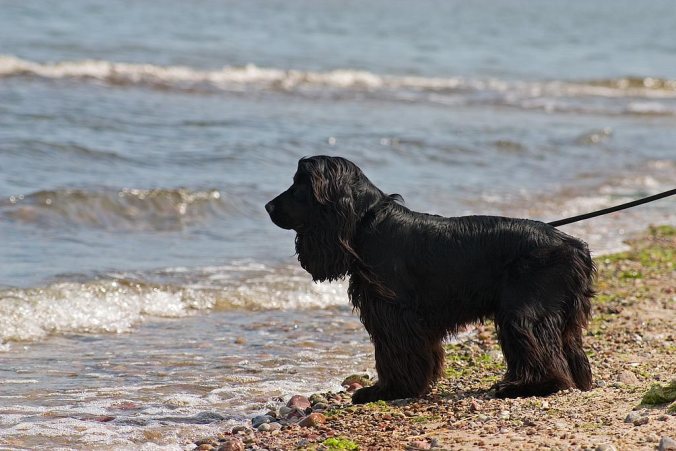