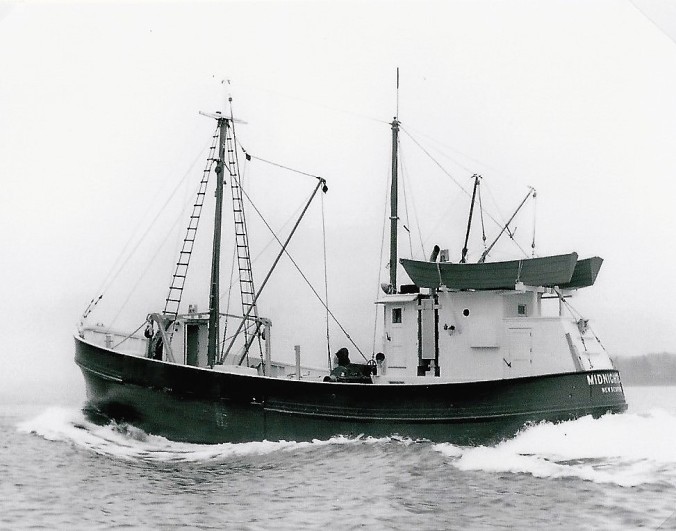 A STORM AT SEA

THE TRUE STORY OF A BOMBOGENESIS STORM

The saga of men at sea, and the six ships and thirty-six men who were lost, when an Extratropical Cyclone visited the Western North Atlantic.

These losses included the fishing vessel Midnight Sun,
a New Bedford scalloper, and her eleven-man crew.

HOVE DOWN ON GEORGES BANK

THE ESCAPE FROM NEPTUNE’S TRIDENT

The Romans knew him as Neptune!

The ancient Greeks knew him as Poseidon!

He was their God of the Sea!

He carried a “Magical Trident,” and it was believed that if he was angry, he could slam his Trident into the ocean floor, and it would create earthquakes and violent storms at sea.

The Romans knew her as Venus!

The ancient Greeks knew her as Aphrodite!

She was the Goddess of Love and Beauty!

It was believed that she could grant prosperity and victory.
She was considered the mother of the Roman people.
It was said that she was born from the foam of the sea.

Venus and Neptune linked by the Sea!

“There was very little that your father didn’t know about fishing.”

“His father saved my father’s life.”

Spoken to author and filmmaker Kevin Kertscher,
while we were discussing the premiere of the documentary film,
“The Finest Kind – The New Bedford Fishing Industry.”
On August 13, 2017

This book is dedicated to the following;

My father, and the mate of the F/V Venus, during a vicious nor’easter storm, while fishing the Northern Edge of Georges Bank, on November 15th, 1962.
A New Bedford Fisherman for fifty years.

My grandfather, and the holder of the Carnegie Medal for Extraordinary Heroism, for his role in the rescue of the crew of the six-masted schooner, the Mertie B. Crowley, on the backside of Martha’s Vineyard, in a nor’easter snow storm on January 23, 1910. His lessons allowed my father to have the skill to bring the F/V Venus home,
after being “Hove Down at Sea,” on Georges Bank.

My great-grandfather, lost at sea while fishing on Georges Bank, in the year 1880.

Swept from the deck of the F/V Terra Nova, while fishing in heavy weather,
on Georges Bank in November of 1966.

EACH AND EVERY ONE OF THEM!

November 7th, 1962, a Wednesday, dawned clear and bright in the harbor of New Bedford, Massachusetts. There is a massive high-pressure system sitting off the East Coast of the United States, and it is in control of the weather from Maine to Florida. It’s going to be a beautiful early November day with a high temperature of 46-degrees in New Bedford. Captain Thomas Larsen and Captain Louis Doucette, Jr., are busy preparing the F/V Venus to leave the dock at the D.N. Kelly & Sons Shipyard, in Fairhaven, Massachusetts. The Venus will be leaving shortly for a fishing trip to the Northern Edge of Georges Bank. Captain Magne Risdal is busy preparing the F/V Midnight Sun to leave the same shipyard. Captain Risdal is carefully monitoring the loading of the food for the trip because his regular cook, Hallvard Stoll, has been fighting off a bad cold and he has decided to take this trip off, to recover before the winter weather takes hold. These two boats are sister ships, both built to almost identical dimensions by the Harvey Gamage Shipyard in South Bristol, Maine. The Venus is two months old, and the Midnight Sun is two years old. These boats are both beautiful eastern rigged, pilothouse aft, wooden fishing boats, built by one of the top boat builders in the business. Gamage boats are built to be strong sea boats with an excellent track record of longevity and seaworthiness. Gamage boats are handmade by highly skilled Maine craftsmen. The Venus is rigged as a dragger to trawl for groundfish, and the Midnight Sun is rigged for scalloping, they are both top notch fishing vessels, and the captains and crews of both boats are friends.

On this same morning, Thomas Ewing III is a lawyer with the law firm of Debevoise, Plimpton, Lyons, and Gates in New York City. He is a young hard-charging attorney at one of the top law firms in the world. He is also an avid sailor, and he is the owner of a 30-foot, blue-hulled, sloop rigged sailboat, the Kria. He is busy this morning with his law career, but he is also busy contemplating a sail from Point Judith, Rhode Island to Essex, Connecticut, this weekend. His law associate and fellow Yale graduate, Attorney David Evans, has just agreed to act as crew on the Kria, for this weekend’s sail.

The M/V Captain George is a 442-foot Greek-flagged cargo ship, and she and her crew have recently completed stops in New Orleans, Louisiana and Houston, Texas to take on cargo. The ship is in St. Mary’s, Georgia this morning taking on a load of explosives to be transported to the oil drilling industry in Libya. She will be leaving St. Mary’s, today and after another brief stop in Savannah, Georgia she will be bound for the Mediterranean Sea. The crew is looking forward to the trip east across the Atlantic, because after the delivery in Libya, they will be on their way home to Piraeus, Greece.

The schooners Curlew and Windfall are tied to the dock in Newport, Rhode Island, and they are preparing for a voyage to the Caribbean. They both plan to enter the winter charter trade in the Virgin Islands. The two crews are friendly, and they agree to an informal race to the Caribbean, with an intermediate stop in Bermuda, to keep things interesting over a long sail.

The USNS (United States Naval Ship) New Bedford (AKL-17), and her sister Camino Class cargo ship, designated as the USNS AKL-43, are both docked at the State Pier, in New Bedford, Massachusetts. They are taking on supplies for the United States Air Force – Early Warning Radar Detection Towers, known as “Texas Towers.” They will be making a run out to re-supply Texas Tower #2, and Texas Tower #3, next week. These radar towers are erected offshore of the East Coast of the United States in international waters. They are designed to be our first line of early warning defense, should the Soviet Union launch an attack against the United States. We have just lived through the Cuban Missile Crisis, and the Cold War is very hot right now.

Captain William Fielder and crewman Louis Raulet of the F/V Moonlight are working on the boat in New Bedford, and they will be heading out to the Georges Bank fishing grounds tomorrow.

On this morning, John Isaksen is the mate on the F/V Aloha, his father Magnus is the captain. Although he doesn’t know it today, John Isaksen will be the last man to speak to the captain of another New Bedford scalloper, before she is lost with all hands.

Captain Hans Davidsen, of the F/V Florence B., will be taking his scalloper out to the Southeast Part of Georges Bank tomorrow, to commence a fishing trip. In seven days, the Florence B. will amaze Captain Davidsen with her ability to shed water. On this day, he has no idea that the Florence B., has submarine like capabilities.

Captain Albert Dahl, of the F/V Monte Carlo, is at his home this morning in Fairhaven, Massachusetts. He will be leaving for the fishing grounds on Saturday. He has no way of knowing it today, but he will soon be repeating the same word three times that all mariners dread, “Mayday, Mayday, Mayday.” He also doesn’t know that he will soon be leading the fight to improve the weather forecast for the fishing fleet.

Captain Edward Clark is the master of the 155-foot, Canadian cargo ship, the M/V East Star. He departed Havana, Cuba on October 24th, right in the middle of the Cuban Missile Crisis and the U.S. Naval Blockade of the island of Cuba. This morning, Captain Clark and his crew of twelve men, are battling a problem with the quality of the diesel fuel that they have on board. The East Star is somewhere north of the Turks and Caicos Islands and south of Bermuda. The M/V East Star entered and then left Cuba, during one of the most intense moments in world history, the nuclear weapon showdown between the United States and the Soviet Union. This morning he is squarely in the middle of the infamous Bermuda Triangle, and his ship is experiencing engine failure. November 7th, 1962 is not starting out to be a good day for Captain Clark, and things are going to get much worse.

Robert J. MacCharles is at the helm of his 30-foot ketch rigged sailboat, the Islander, and along with two friends, he is sailing somewhere south of Cape Cod. He is four days into a three-month vacation sail. His next intended destination is Bermuda. Captain MacCharles and the Islander, will never make it to Bermuda.

Within ten days, thirty-six men will be dead, and six of these ships ranging in size from 30-feet to 442-feet long, will be lying on the bottom of the Atlantic Ocean. The remainder of the boats and men who survive the coming storm will never be the same, as they were, on this bright sunny Wednesday morning, in November of 1962.